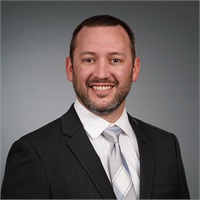 Nolan Farwell – Nolan joined FRA in May 2005 after graduating from Kansas State University with degrees in Finance and Economics. He says, “security and portfolio analysis class hooked me on the investment world.”  He holds the Series 7, 24, 51, and 66 securities registrations and supports the FRA team as a Service Advisor and General Securities Principal. In May 2005 he began his career at FRA as a service advisor, then built his own advisory practice, but more recently took over the compliance “General Securities Principal” role, which involves compliance oversight for FRA.

Outside of the office, Nolan mentions his wife, Katie, and their four children as blessings in his life. They enjoy cheering on the Hudson Pirates and Kansas State University Wildcats, love getting away to the mountains as often as possible, and being active in their church. You probably will find Nolan playing ball with his kids, working in his shop, or spending time in the outdoors with his family.